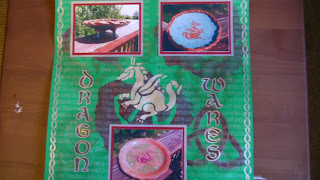 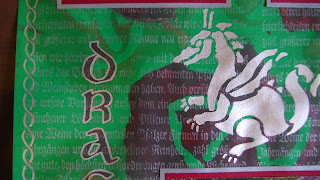 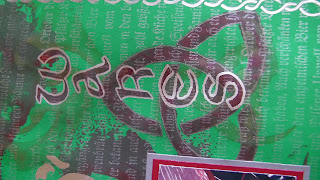 Here is a scrapbook page I created with no embellishments on the page. I created the background with a plain piece of green 12x12 cardstock. I then used a home made stencil to create negatives and positives with some home made glimmer mist. I used a silver paint pen to stencil the dragon in the center, create the knots on the edges and to outline the letters. I used my Celtic Letters stamp set to title the page. I'm really happy with how this page turned out. I spent a long time on the background but it was worth it.
Posted by Celina at 2:39 PM No comments: 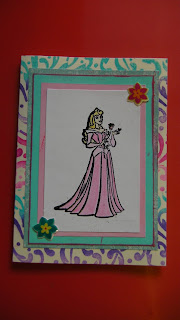 Here's a card I made today out of paper in my scraps drawer. This is for a little girl named Lila who made us some treats for our role playing game last Thursday. She likes princesses so I pulled out this stamp I got awhile ago. I used a background stamp and a multi-ink stamp pad for the background and random bits of paper. I inked the piece of plain blue paper and added two flower stickers for some slight embellishment.
Posted by Celina at 6:21 PM No comments:

I made a Youtube video a little bit ago about how to use your Nestabilities Dies with the Texture Boutique: you know, the one that's supposed to be for embossing anyway. I figured out the trick and couldn't wait to share it with people. 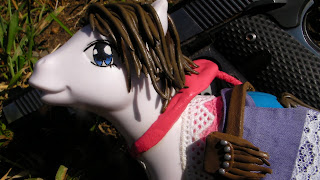 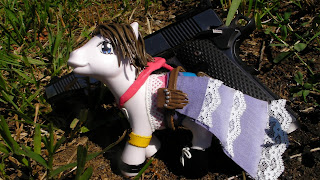 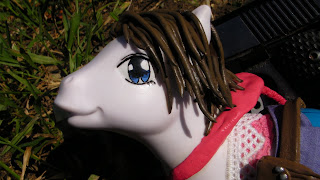 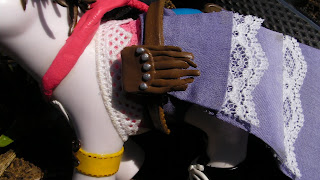 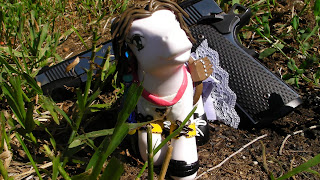 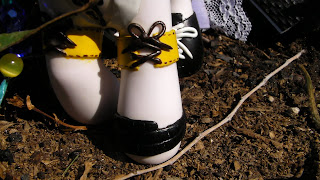 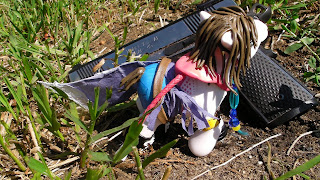 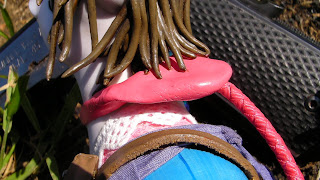 Here is my newly completed version of Gunner Yuna from FFX-2. This was for a trade on the mlparena with KCherry. This girl took a long time to do. I had some life bumps along the way and I just wasn't motivated unfortunately. There were elements that just took a long time to do like the hair.

I started with the boots, sculpting the base of each boot without the bottom or the tongue. I added those later after things had cured. I then added the armbands. Her jeans were also sculpted and I used something similar to the faux jean stamping technique only I used paint and a makeup sponge to get the effect. I think it turned out quite well. I painted the pink lace to get it the right color and added the white on top. I didn't have enough space to add the gold cord, but did managed to sculpt her shirt on. The symbol on her chest was done with liquid sculpy then painted black. I created the rat's tail out of part of a coat hanger with ribbon woven around it. I sealed that with glue so it wouldn't come  unraveled when I went to cut it to size. Her hair is individual coils of apoxie sculpt rolled out and placed on the head. It took me a long time to get the hair the shaped that I wanted it. It was a total pain to paint too. Her hoody was a bit of a pain to sculpt as well, just the shape of it. I added texture to that with the collar of a shit I have oddly enough. I made the skirt out of some plain white cloth dyed and lace added. I put all the layers together with Paper Studio double sided adhesive. I love that stuff! I don't think I will ever attempt to sew pony clothes again. The bag was sculpted and the belt is real leather painted to match the bag. The beads I tried to get as close to the character as possible. I used the first picture here to draw out the eyes. The shading was more or less me messing around trying to get it to look the way I wanted.

This pony was a tough one just because of the complexity. I was originally going to sculpt everything, but I realized trying to sculpt lace would have been pretty impossible and I wanted to do the skirt out of sculpy originally but the ruffled shape wasn't going to work. I liked how I used both sculpted elements and cloth/lace elements on this pony.
Posted by Celina at 3:20 PM No comments:

Celina
Billings, MT, United States
I'm a 27 year who has been scrapbooking/stamping for about 9 years now. I've also been customizing My Little Ponies for about 8 years now.